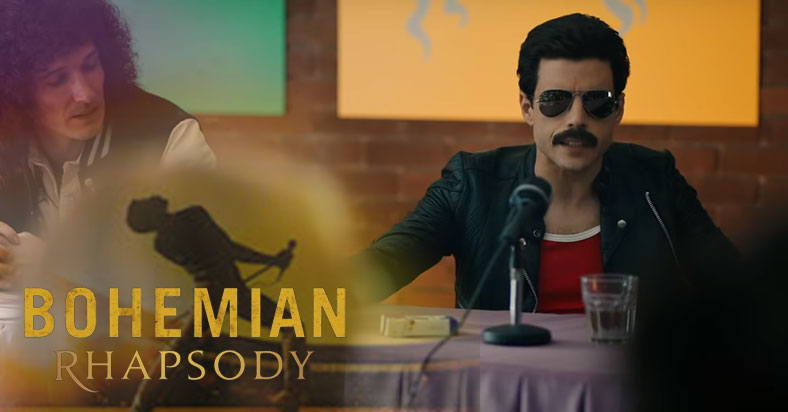 Watching the Bohemian Rhapsody movie feels like rediscovering a legend, and of course we are talking about Freddie Mercury. I couldn’t say that I’m a huge fan of him or Queen, I’m not the type of person who marries bands and listen to their music all day. Plus, I was born in the 90’s so I pretty much heard most of Queen’s hits through my parents initiative to play their songs on the radio from time to time. But after watching this movie, I couldn’t help myself but binge watch on documentaries about them.

I first saw a video performance of Queen when I was around 13-ish years old, and my first impression about Freddie was that he was some sort of party animal. I never really got the chance to dive deeper into that person until I saw this movie. And boy, I was holding my tears all through out the movie. I never realized how electrifying this man’s performance and passion for life, friends, and family. Rami Malek did an absolute great job in portraying one of the greatest legends the 20th century has ever produced.

The film focuses on the life of Freddie Mercury and how the band Queen came to be. Everything about the movie was almost magical and I would end up tapping my feet and nodding my head every time they’d play a song. I think they tried to make the movie as accurate as possible to what footage we have of the band’s performances. From hairstyles, accents, appearance, clothing. Everything was spot on.

The movie was not biased alone to the talents of Freddie and also showed the other band member’s contributions. It’s like Queen wouldn’t be Queen without out one of the original members. They needed each other and it was like family. Love and family is what molded them together and bring out the best of them. There was a time that Freddie went solo but he just wasn’t the same without his band.

I was moved when the movie showed the sadder side of life of Freddie Mercury.  He was happy and energetic on the outside, but the truth was that he always felt alone and like an outcast. He hid his depression through different modes of escapism: drugs, partying, sex, and even left Queen because he thought he needed to “grow”. To make things worse, he was being betrayed by some of the people he though he could trust. Fortunately, he was able to walk out from this kind of life and reunite with his band.

The plot also covers how Freddie tragically contracted AIDS but also showed us how resilient he was. To him, he was a performer. He was alive when he was on stage. For him to let his illness get in his way and the band’s was just not going to happen. He knew his life was fleeting away so he truly gave his best with what time he had left. All because he loved everyone, and most importantly, he learned to love himself.

The movie ends with the band being able to play a magnificent performance in Live Aid (1985). The creators of the movie did great job in bringing out a marvelous cinematic experience of it. I’m sure it was nothing compared to the experience of being in the real Live Aid concert, but it absolutely gave me chills.

Here’s Queen’s performance that was replicated in the movie: