D-Day, the 6th of June, 1944. You’re scared for your life in this cold European beach. You’re wet and there’s sticky sand all over your body.  Bullets are buzzing everywhere as you try to sink yourself in any little cover you can find. Exploding mortars and shells made your efforts looked in-vain.

Some of your friends are already dead. Some are bleeding and shouting for their mothers. You don’t know what to do. They didn’t prepare you for anything like this in training. You and your buddies are all pinned down, praying, praying, PRAYING for some miracle to get you through this day alive. A Catholic friend starts praying his rosary, another Christian starts mumbling scriptures, and a Jew starts praying in Hebrew. Confusion and fear on everyone’s faces.

An hour of this has passed and now a second wave of your fellow crusaders has arrived. They hit the sand, and face the same hell you’re dealing with. Not much help from the new guys on the beach, just more death basically. All of a sudden you hear a familiar voice, giving orders to fight back. You turn around to confirm who it is. To your surprise it’s General Norman Cota! What the hell is he doing here?!

The General assesses the situation. After a brief scan, his face says it all: there’s no escaping this! He calls on you and your buddies for a rally. In a calm manner he says “Gentlemen, we are being killed on the beaches. Let us go inland and be killed.”

You then feel your heart beat faster. You look at your friends in the eye and in that moment you feel you are more connected to them than ever. You give everyone a quick nod as your way to give your final respects. Because all of you had mutually agreed that it was better to die fighting your foes than die crying for your mothers.

All of you bravely inched your way to a sea wall from the shoreline. Some men are now fixing Bangalore explosives to blow up the barb wires blocking the advance. Somebody yells “fire in the hole!”. Then comes the loudest bang you have ever heard. You now see the defiant General leading a charge into the opening.  Assaulting the enemy with a .45 pistol, you see this old man giving everything he’s got. You’re not gonna let this man down. You’re not gonna sit this one out, not after so many of your buddies has fallen. It’s pay-back time. Let it rip!

You fight you’re way through with him not realizing how far you’ve come from the shoreline, until some enemy entrenchments have been overrun. Some Germans have finally started to raise their hands in surrender. The gun fights have started to subside. You’ve won. You look at the Brigadier General one last time. And now you know how a leader should lead his men. 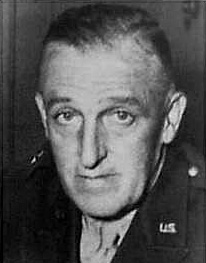 Norman Cota was a high ranking senior officer for the United States Army and was heavily involved in the planning and operations of the Battle of Normandy in D-Day. At that time, he was a Brigadier General who was famously known to have lead soldiers in the heat of battle.

During the planning of the allied invasion, he strongly opposed the daytime assault his high officers has proposed. He wanted to keep the element of surprise as he knew that the beaches of Normandy was heavily defended by the Germans and how the bad weather can cause problems and confusion for their landing soldiers.

His worries for the daytime invasion soon became a reality but he managed to set foot on the very battlefield and lead some men into a charge that would become one of the first important breakthroughs for the Americans during the battle.

He’s famously quoted for saying “Well, God damn it, if you are Rangers, then get up there and lead the way!”. He said this to some pinned down rangers on the beach and the line “Rangers lead the way” soon became their moto. He was also heard by many saying “Gentlemen, we are being killed on the beaches. Let us go inland and be killed.” after rallying some troops for an assault.

After the allies won the invasion of Normandy, Cota was assigned to lead the 28th Infantry Division and was soon picked to to represent the U.S. Army in the “Liberation of Paris” parade on August 29, 1944.

MAGA Hat Teen: What Really Happened, the Repercussions, and Lawsuits