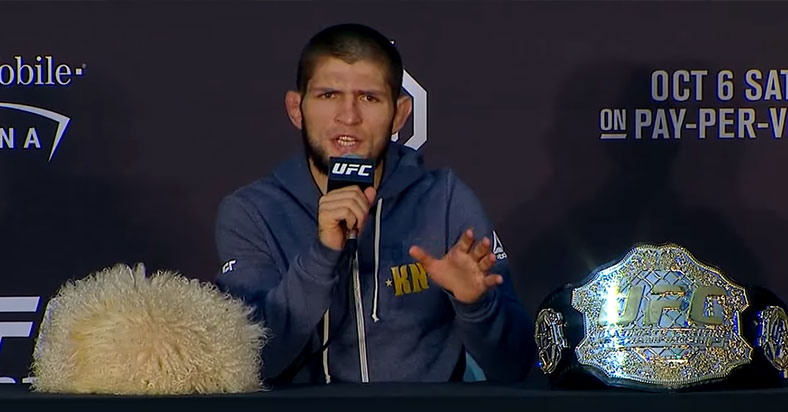 Khabib “the Eagle” Nurmagomedov has recently apologized to the Nevada Athletic Commission for the brawl that occurred after his win against Conor McGregor on Oct 6, 2018. Many fans were shocked and disappointed about the incident and called out Khabib for it. Click here to see fan’s footage of brawl

In his post-victory press conference, Nurmagomedov has expressed his opinion about the media’s way of hyping MMA with propagating “trash-talking” between professional fighters. He claims his actions were out of provocations from McGregor’s team who made slurs against his father, religion, and other personal matters. He questions the backlash he was receiving from the public was suggesting they were one-sided. He points out that his opponents weren’t only arrogant in behavior but also almost killed someone on the day they attacked his bus.

He also called McGregor and his team “tap machines”, signaling how he defeated McGregor.

On a pre-fight conference, Khabib has already foreshadowed his way to victory when he mentioned that Mcgregor always give up when he’s tired. He has specifically mentioned in another interview that this will be his strategy. Just like in his fights with Diaz and Mayweather. He then later received boo’s from the crowd after he answered “no way” when a man asked him if he’s going to shake Conor’s hand after the fight.